I know in the past, when I was paper scrapping, I was always so bummed out when my pictures turned out so dark and underexposed. They were hard to scrap with and really showcase the photo. I decided that I was going to learn how to fix them before getting them printed. I had also decided that I wanted to learn about lighting in photography to help avoid having to fix them in the first place. First, I’m going to share a few ways to fix the lighting in your photos using Photoshop Elements, Adobe Camera RAW, and Lightroom. Then, I will share some lighting tips for taking your photos to help avoid having to “fix” them in your photo editing program. 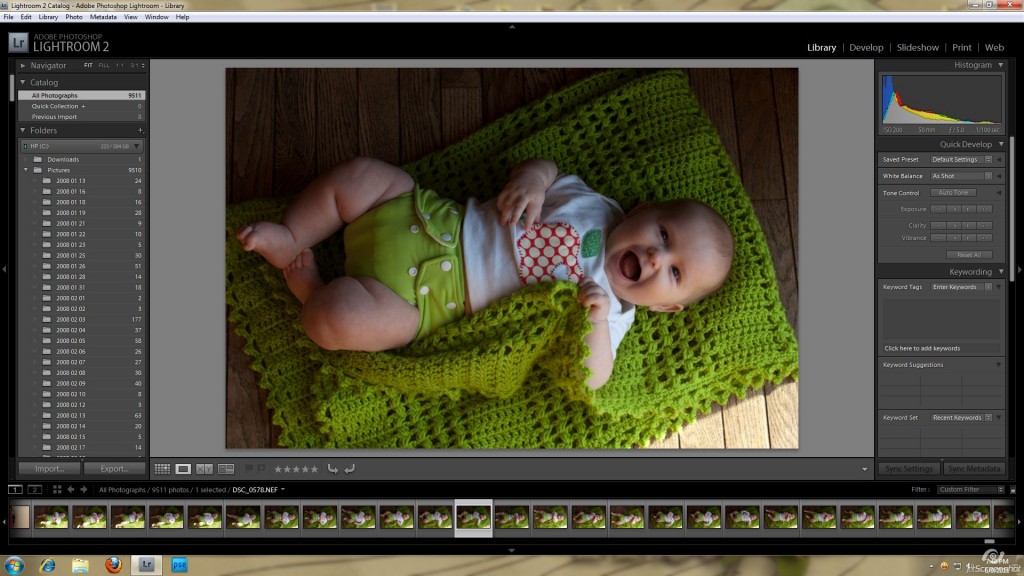 The first thing I do is go to the presets and click on “Auto Tone.” This is a great starting point, and I normally like the outcome, but sometimes I like to do a bit more tweaking. 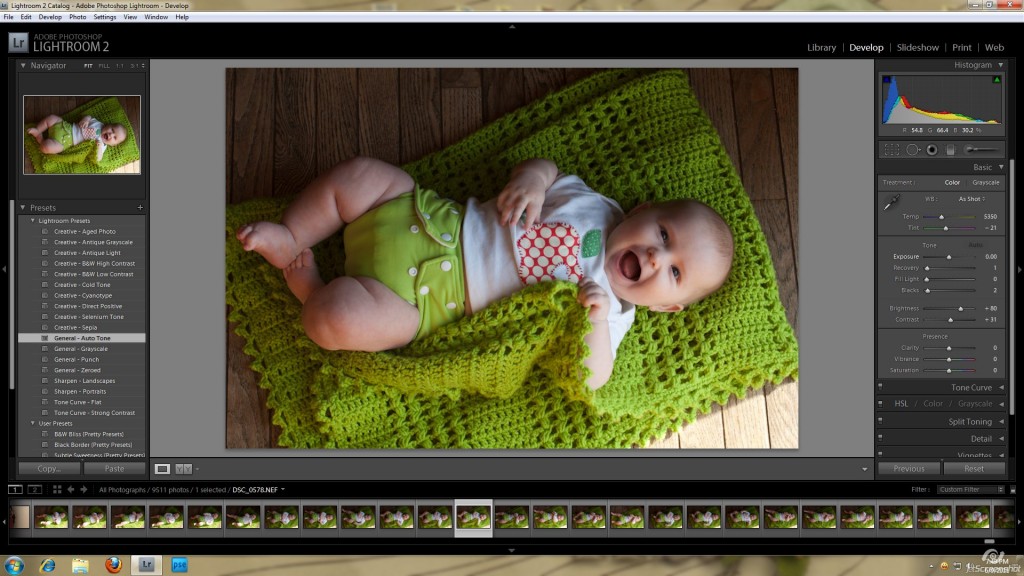 The next step I take is to play with the histogram (the little graph in the upper right hand corner). The goal is to move the spikes on the left over, so that everything is more centralized in the graph. You can do this two ways. You can actually grab the color graph that you’re trying to move and move it over. Or, you can use the bars below and play with them. I start from the top bar (the “Exposure” bar) and then work my way down. Starting with “Exposure,” I move that over to my liking, making sure that I don’t bring it so far over that the graph ends up too far to the right, which means I’m overexposing the picture.

So, once I’ve gotten the overall exposure to where I want it, I’ll move the “Recovery” bar. This will help recover some of the overexposed parts of the picture—moving the graph from the right side back to the left a little bit while leaving the rest of the exposure the same. Look at your histogram while doing this. You’ll see a triangle in each of the upper corners of the histogram. If part of the graph is too far to each side, that triangle will light up with the color of the histogram that is too far overexposed or underexposed. Your goal is to get your graph to meet the edges of the histogram without those triangles lighting up. So, once you’ve gotten the exposure where you want it, you’ll use the “Recovery” bar to bring back that overexposed part just until that triangle goes back to gray. The next one down is “Fill Light.” This does opposite of “Recovery.” This one moves the underexposed part of the graph to the right while leaving the rest the same. So, you’ll do the same thing and move that bar just until that triangle turns gray. Now, that’s just the basics. You can play with the other bars to really get your graph where you like it. Remember that your goal is to spread that graph out throughout the histogram without lighting up the triangles. 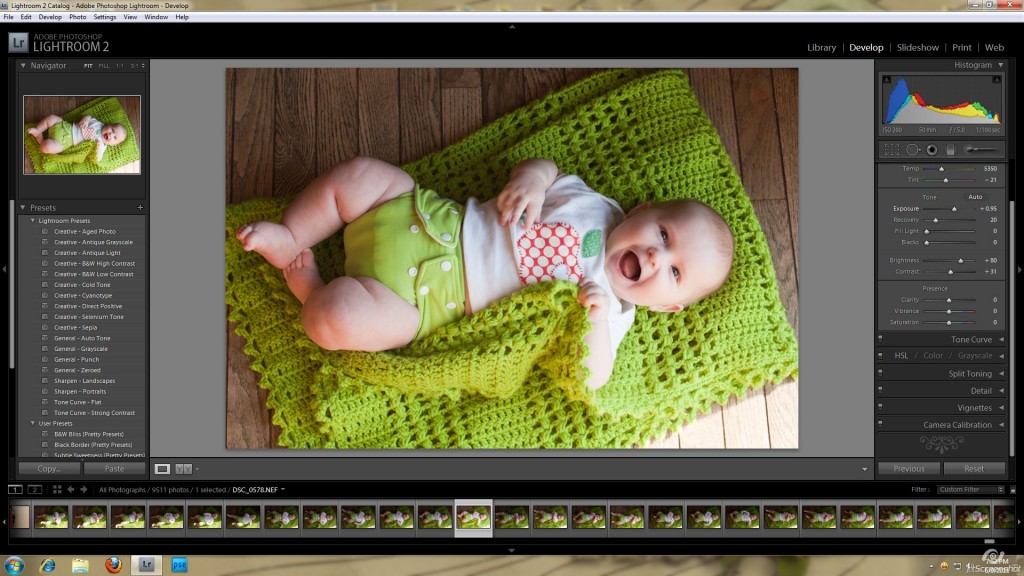 One last thing I like to do is to go right below the bars to the “Tone Curve” and play with that. That also moves the histogram around to make it more interesting. Sometimes I just toggle to linear or medium contrast, but you can play with the curves to really get the histogram more spread out. I really like Lightroom and find I get the best results when editing my photos using it. I know not everyone has LR, so I’ve got some fixes for those who use Photoshop for your photo editing. 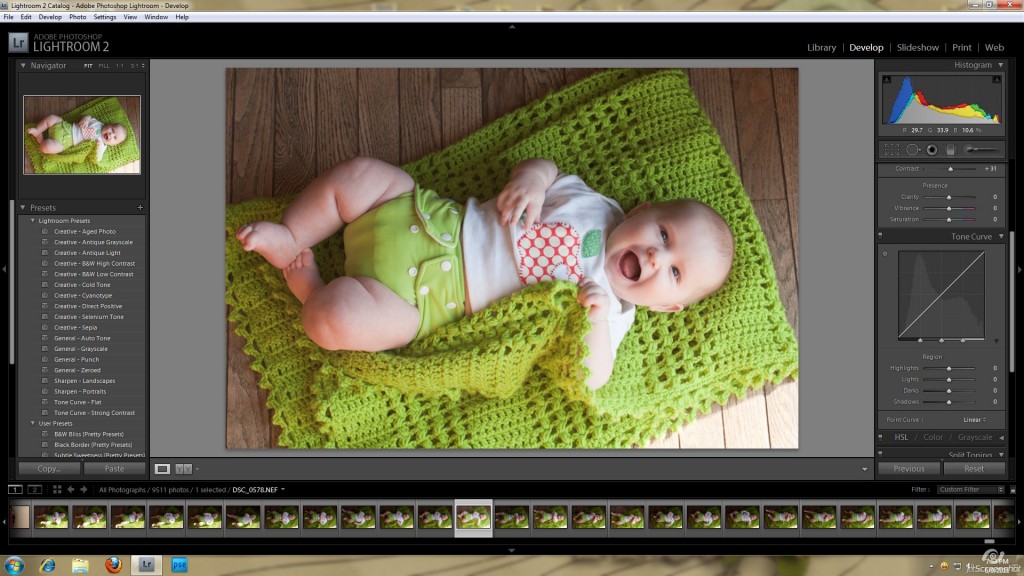 I really like Adobe Camera RAW (ACR) as it is very similar to LR. I can get very similar results to those I get with LR. I just feel like I have a little less control with ACR compared to LR. I shoot all my photos in RAW so ACR automatically comes up when I open a photo while in PSE. If you don’t shoot in RAW, you can go to “File→Open As” and open your .jpg as a RAW file. Technically it’s not RAW, and you’ve lost some information in your photo, so when you’ve underexposed a photo it will become grainy in those areas when you fix the exposure. If you have the option to shoot in RAW, I totally recommend it for being able to save some of your photos. Like I said, ACR is very much like LR in that you have your histogram in the upper right hand corner. I usually click “Auto” as my starting point and then again, I move around the bars until I get an exposure I’m happy with. I start with “Exposure” and then work my way down the bars until I’m happy with how the histogram looks, and my picture too. 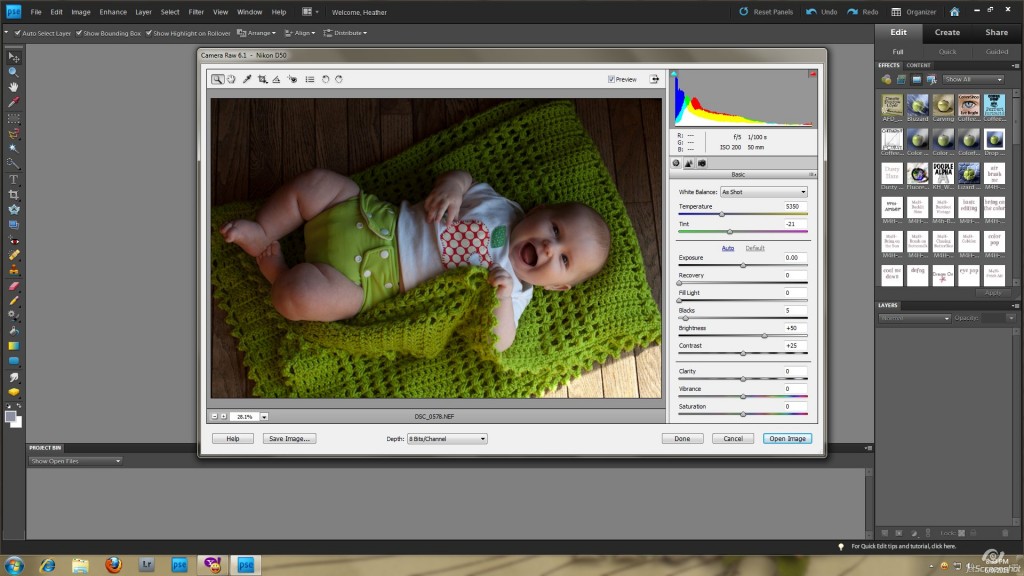 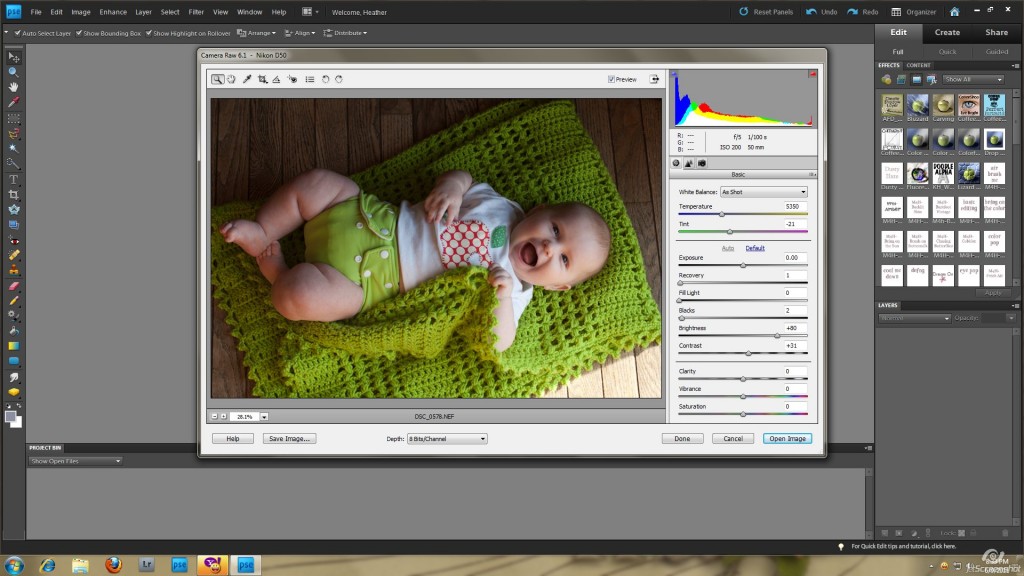 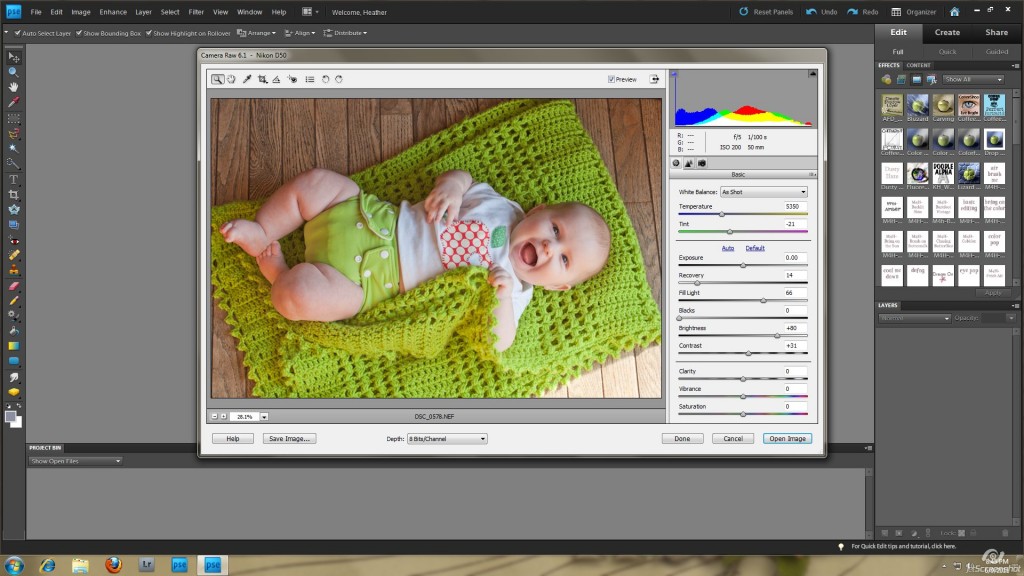 Lastly, I’ll show you what I do in Photoshop Elements (PSE). This is a little bit different in that I don’t have the histogram to work with.

The first thing I’ll do is go to Enhance → Adjust Lighting → Shadows/Highlights and adjust the “Lighten Shadows” bar until I’m happy with what I have. I do this because I’ve found that I like the results for my next step better after I’ve done this first step. 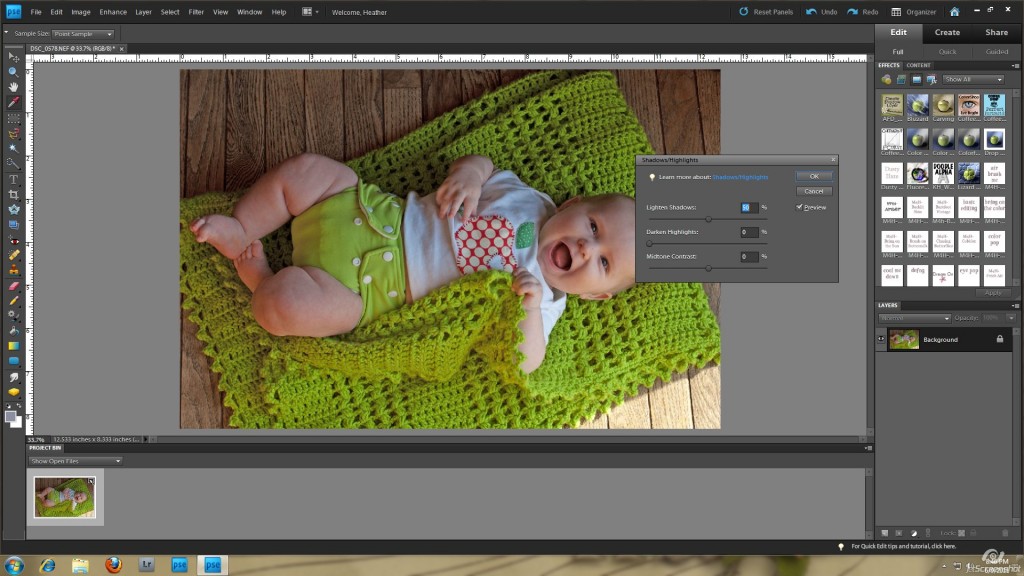 My next step will be to go to Enhance → Adjust Lighting → Levels, or Ctrl + L. Here you will see something similar to a histogram. I do a couple things in here. First, I’ll click on the gray dropper and click on something that’s supposed to be gray. This gets me to a great starting point and usually gets my levels close to where they need to be. 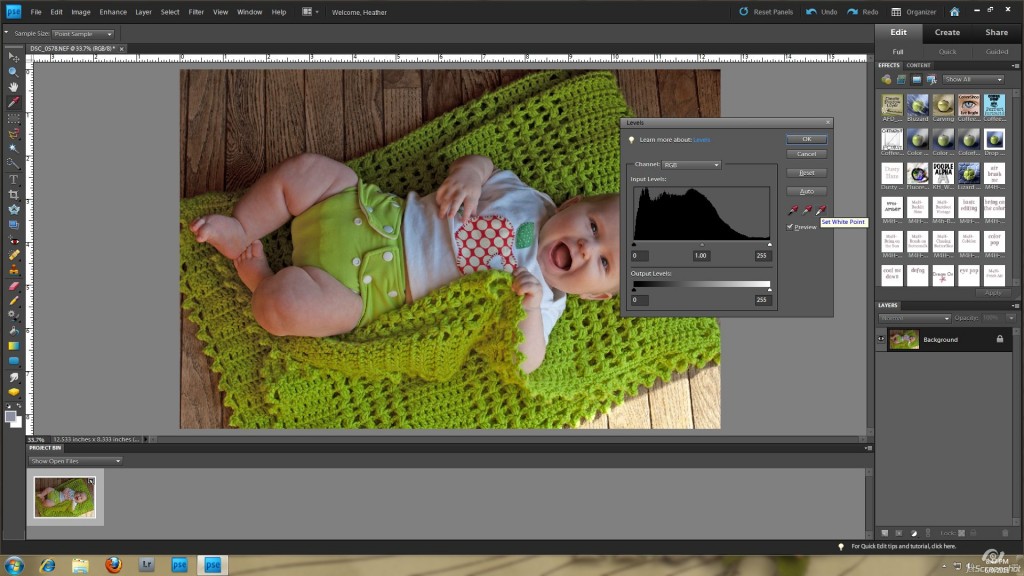 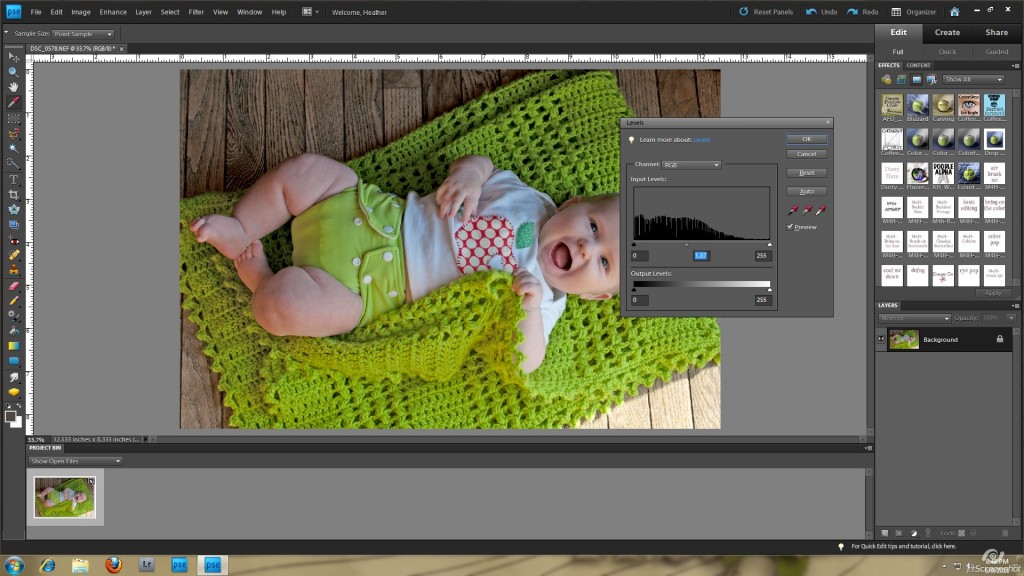 I hope you’ve found this helpful in “fixing” the lighting of your underexposed pictures. Remember that if it’s severely underexposed, there will be some noise even in RAW pictures. There just is too much lost information in that photo to get it back. I also said earlier that I had some pointers in helping to prevent underexposing your photos. So, here are some things to think about.

I hope you found this to be helpful in fixing your underexposed photos or avoiding them in the first place. Now, go take those wonderful pictures for scrapping those wonderful memories!

Lightroom Basics and How to Edit Multiple Photos at Once

Hey everyone, Trish here, and today I’m going to do a quick breakdown of Lightroom and then how to edit multiple photos all at… 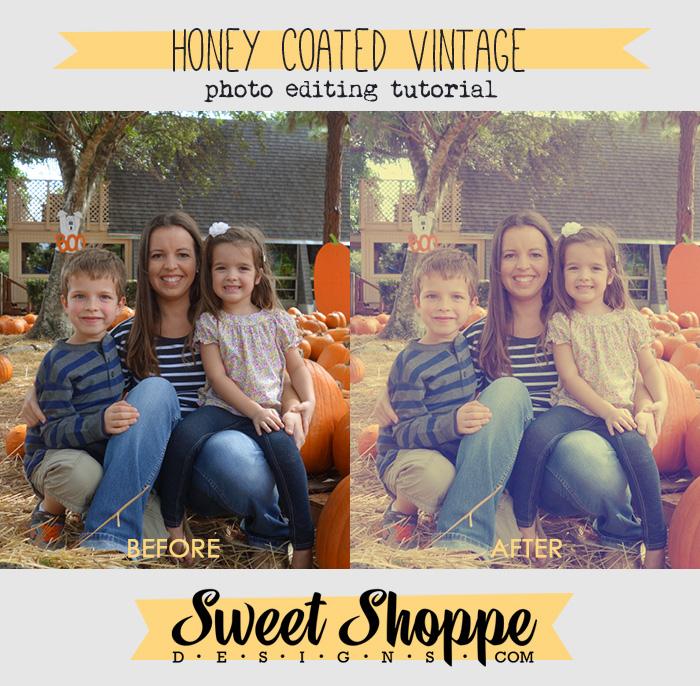 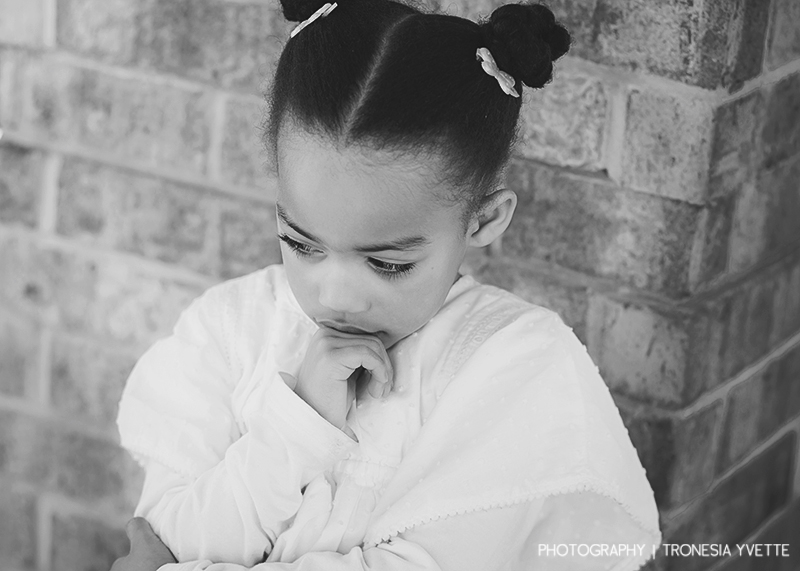 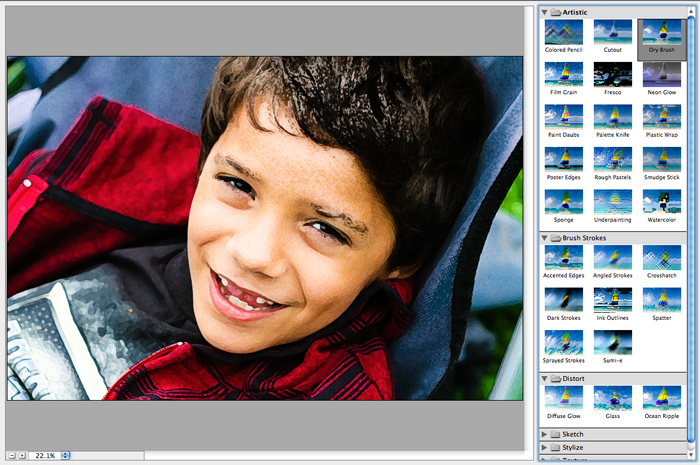